His name was Naseer and we met him during our stay in Aqaba, south Jordan. We came to Aqaba from Eilat, Israel, which was only a 20 minutes’ drive from there. 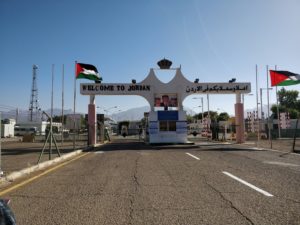 Our aim was to visit Petra and Wadi Rum; a 30km area in the desert. Going to these two places has always been my dream so I was overjoyed by the prospect. On our first evening we bumped into Mohammed while looking around the shops on the busy streets of Aqaba. When he found out we were Hungarian, he started talking in our language to us, broken but very good for a Bedouin guy living in Jordan. I was shocked! We kept chatting in Hungarian and he told us that he can arrange an overnight trip to the desert for us with a jeep tour, dinner and breakfast included for 120$.

First we were quite sceptical of course, he was just a guy in a spice shop, no travel agency or anything so it didn’t seem very safe. Then he started showing us a book with reviews from his previous guests in different languages and all of them positive. 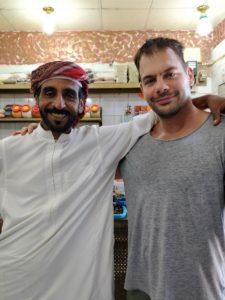 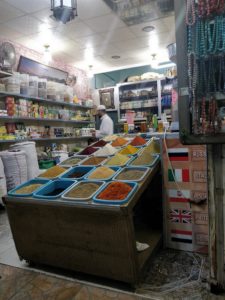 That was when we thought, why not? He looked nice and the reviews were convincing, so we decided to get a trip to Petra first, and the trip to Wadi Rum with him. He introduced us to Naseer, a short man with a firm handshake around 60 years old, who would be our driver for both trips.

The next morning we met Naseer just after breakfast. He greeted us with a big sleepy smile and opened the back door of his green taxi for us. Petra was about 130 km away, with windy, serpentine roads leading there. It seemed that Naseer thought he is a race car driver and his intent was to win the race. I was scared shitless, praying to survive the journey the whole way, on the brink of tears at times. He translated speed restrictions his own way; if the speed limit was 40, he slowed down to 100. If it was 60, he slowed down to 120. He played Russian roulette by overtaking cars going uphill. Our average speed was around 160 km/ph.

We got to the place in no time fortunately still alive! I was dreading the way back, but I was doing my best not to think about it, as we were about to discover the place that has been on my bucket list for as long as I can remember. 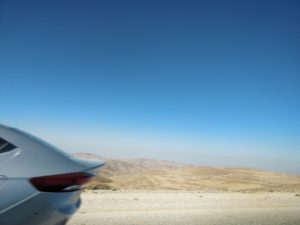 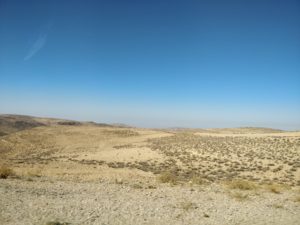 You can read about our visit to Petra here.

We agreed to meet  Naseer at the gates in 4 hours’ time, but there was so much to see that we ended up being an hour late. Naseer wasn’t angry when we finally got back, just relieved. I was afraid he’d drive even faster because we were late. Luckily he seemed to drive a little slower if anything. We stopped a few times to take pictures of the landscape and so he can have a smoke. That was when he showed us pictures of his big family, pointing out each family member one by one. It was so touching to see how proud he was of all his children and grandchildren. 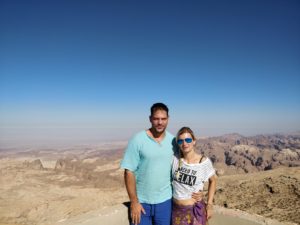 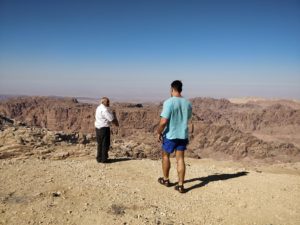 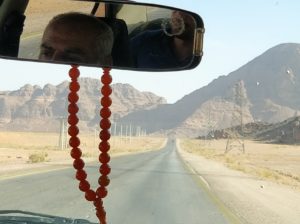 e next day he drove us to Wadi Rum, introduced us to Mohammed, our guide for the jeep tour. We must have looked a bit scared at the prospect of being dropped off in the middle of the desert with a stranger who barely spoke any English, but Naseer assured us that it’s safe and said that he has known Mohammed and his father for ages.

You can read about our jeep ride through the desert and our stay in a Bedouin camp here.

The following day he came to pick us up at the Bedouin camp, sitting down with us while we had our morning coffee. Outside the camp we saw him collect sand in a glass bottle, we thought it was for him but he gave it to us with a big shy smile on his face, along with a tiny copper jug as a souvenir.

This time, on the way back to Aqaba I noticed that he was driving much slower than before. I asked him why the change, and he said that it’s only for us, so we are not scared. Then I remembered mentioning to Mohammed after our trip to Petra that Naseer was driving very fast, so he must have told him. Luckily Naseer didn’t take any offence. The drive back was 60 km, and I needed to go to pee, so I asked Naseer if there would be a toilet on the way. He said yes, and drove into the other lane on the motorway with the traffic coming our way to get to the petrol station on the side of the road. Wow, I thought, I have never seen this done before!

We continued to the Aqaba beach, where we agreed for him to drop us off. Once there, we started saying good bye and suddenly Naseer turned his back to us and started crying. We were shocked, not knowing what happened, so we tried to calm him down. After a few minutes he managed to stop and said that it’s because he liked us and he wouldn’t see us again.

At that moment I wanted to hug him. I felt sorry that we had nothing to give him to remember us by. He was obviously embarrassed for expressing his feelings like that so he hastily said ‘bye!’ and quickly left, with us standing in shock, not knowing what to say.

Naseer, we will always remember you as the nicest taxi driver in the world!

If you ever need a driver in or around Aqaba, or to organise a tour in Jordan: 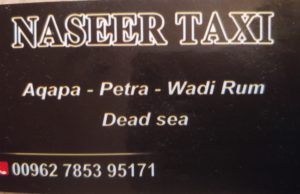 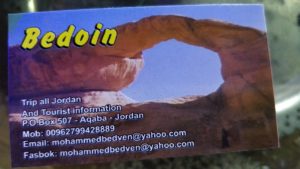