On one of our best days in Pai, the one we spent chilling at the swimming pool, we ate an avocado toast with friend eggs. We were hungry and it tasted great. In the evening when we were in our bamboo bungalow getting ready for bed, I started to feel weird, kind of weak and my head was spinning. Then I had to rush to the bathroom and throw up. I thought it’s just a simple belly bug and I’ll be fine the next day. Peter was there with me, comforting me and doing everything to make me feel better. I was sick all night, when at once about 2 am Peter had to run to the bathroom and throw up too! So then it was both of us, lying there all weak and sick. Somehow we lasted until sunrise, when I was feeling a little better so I went to get some water and cookies to the nearest shop. Peter was still feeling terrible and when I got back from my 10 minute walk I used up all my energy for the day. I drank a bit and ate some cookies, which came straight back up.

All day we lied on the floor of our bungalow’s porch trying to survive the day, not able to move other than when having to run to the bathroom. The Muslim ladies we rented the bungalow from must have thought we got drunk the night before and had a hangover :). Peter was feeling a bit better later in the day and he got us some more water. The next day went pretty much the same, with us lying on the porch and doing our best not to die.

After that we started feeling better, but we didn’t have any appetite. All we did for a few days was going to the closest restaurant and ordering a bowl of rice, trying to chew down as much as we could to gain some strength back. We realized it wasn’t just plain and simple food poisoning, that stuff usually passes in a day or two, but we were at it throwing up for 3 whole days, and feeling really weak for a whole week after that.

Later I read about Pai and food poisoning, and surprisingly I found a lot of posts about travelers getting sick there. I don’t know why that is, but apparently a lot of foreigners get food poisoning there. So be careful when eating out in Pai 🙂

Funny enough, we took a picture of the avocado toast that caused the whole thing 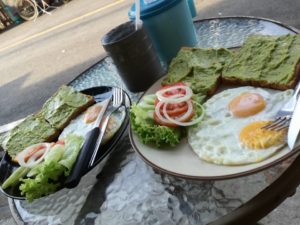